Oh, hello. Just tidying up a bit. You know, I have a reputation for that. You remember that story, don't you? Jesus had come to our house for dinner -- the house that my sister Mary and my brother Lazarus and I lived in -- we were his family of choice, and he was always hanging out at our house. Well, I was flying around in the kitchen clanging pots and pans trying to get everything ready. I was pretty stressed out about having Jesus over for dinner, so I really flew off the handle when I noticed my sister Mary was just sitting around chatting with Jesus instead of helping me out. So I said, "Jesus, don't you care that I am in here doing all this by myself? Tell Mary to get in here and help me." He replied, "Martha, Martha, Martha, you worry too much. Mary has chosen the better part."

Well, I have sort of gotten a bad rap from that story ever since, but my brother wouldn't have come back from the dead if I didn't have chutzpah to march down the road and meet Jesus that day.

I have to say, I was a little miffed with Jesus for not showing up sooner. Mary and I had sent word to him several days earlier that Lazarus was ill. So when I heard that Jesus was on the road just outside of town four days after we had buried Lazarus, I went out to meet him. With my hand on my hip, I said, "If you had been here, my brother wouldn't have died." And no sooner had those words come out of my mouth, I said in the same breath, "But even now I know that God will give you whatever you ask."


Have you ever had that happen to you? You know, it's like you make a complaint and a statement of trust all in one sentence. I pointed out to Jesus that because he was late, Lazarus was dead, then turned around and implied that he could do something about it. Conversations with Jesus are often like that. He is just as interested in our complaints as he is in our trust and faith.

Well, Jesus and I got into this whole theological discussion. He said to me, "Your brother will rise again." And I thought he was talking about the belief our religious leaders, the Pharisees, had taught -- that at the end of the age, the righteous dead would be raised. So I responded, "I know he will rise again in the resurrection on the last day." But Jesus threw me for a loop when he said, "I am the resurrection and the life. Those who believe in me, even though they die, will live, and everyone who lives and believes in me will never die." Then he looked into my eyes and asked, "Do you believe this?"
All of a sudden, I realized Jesus had shifted the conversation to a deeper level than just what the Pharisees taught about resurrection. He was asking me about my relationship with him. So there I was, standing in the middle of the road, and by this time my hand had come down off my hip, and in the eternity that gathered around that simple question from Jesus, "Do-you-believe-this?" I answered, "Yes, Lord, I believe that you are the Messiah, the Son of God, the one coming into the world." It was a confession of faith that transcended any theological category or debate. Jesus was inviting me to move out of my head -- thinking about him, Lazarus, what the Pharisees taught about resurrection -- and to move into my heart: "What do you believe about me Martha?"

After that conversation, the strangest thing happened. Jesus went to the tomb where Lazarus had been buried for four days. There was a huge stone covering the entrance, and Jesus told those who were gathered there weeping and mourning to take away the stone. Well, you know me, the practical one. I quickly turned to Jesus and said, "Ewh! There is already stench, and you want us to open up the tomb?" Jesus replied, "Didn't I tell you that if you believed, you would see the glory of God?" In that moment, I knew that consenting to rolling away the stone would not only change Lazarus' life forever, but mine too.

So they rolled away the stone, and after Jesus had prayed a very simple prayer, he cried with a loud voice, "Lazarus, come out!" We had never heard Jesus raise his voice. I mean, it was really loud. I think that is where you get the phrase, 'loud enough to wake the dead.' And sure enough, a few seconds later, we saw this mummy-like figure stumble out of the tomb, squirming, trying to stay upright, trying to walk, but Lazarus' hands and feet were still bound in his grave clothes and his face still wrapped in a shroud. We all just stood there speechless, and finally Jesus said, "Unbind him. Let him go."

You could say this is a coming out story. Jesus is always calling us to come out. To come out of the places that are killing us -- maybe it is a job, or a relationship, or an addiction, or an attitude. Jesus says 'come out.' Jesus is asking us to consider the things in our lives that keep us bound and stumbling -- half alive: fear, hatred, resentment. Jesus says those have no hold on us as his disciples.

Oh sure, Lazarus came out that day, but I did too. I came out as a disciple of Jesus. My confession of faith in Jesus as the Messiah was life changing. I had served Jesus meals in my home many times, and we had had many conversations, but that day on the road when he told me that he was the resurrection and the life, when he told me that everyone who lives and believes in him will never die -- a great shift happened in my soul. Suddenly, I realized that the kind of life Jesus was talking about was 'abundant life' here and now. In that moment, without actually saying the words 'come out,' Jesus called forth a knowing in me that had been there all along, but now I was ready for it. Now I was ready to live more fully into the life that was before me.

Well, it's about time for me to go. But before I do, let me just ask you, "How do you need to come out? What stones in your life need to be rolled away so you can hear Jesus' voice of life more clearly?" Those are some life and death questions to think about as you journey toward Easter. 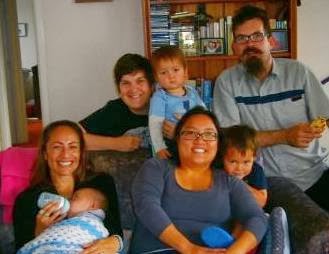